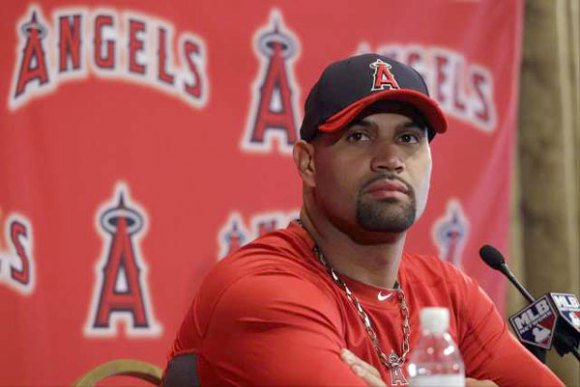 Albert Pujols certainly doesn’t look like the Albert of the past – but maybe it’s turning around for him. Fantasy buyers and sellers beware of the risk of picking up or trading the greatest hitter of the last decade.

It’s not a question many fantasy owners have asked over the years. Having been a perennial top three fantasy producer, Pujols was seen as off limits in trade talks and if he was in the discussion, the price was sky high.

That was until he struggled to find his American League stroke early this season.

What used to be a no-brainer – you can’t trade Pujols – is legitimately up for debate. The question becomes what is he worth and of course that depends on the team you’re dealing with. Does his terribly slow start mean you can offer less than premium players and expect the deal to happen? Or maybe he still commands a ridiculous, and therefore, prohibitive price.

Trading in fantasy baseball is always a fun, but risky proposition.

Trading one of the most consistent players in the history of fantasy baseball is even riskier. So which is the real Pujols? The guy who consistently puts up career averages of .326 with 42 homeruns and 125 RBI or the one hitting .213 with two homers and 17 RBI through 37 games in a new league.

If I had to bet, I would bet on the 32-year-old slugger figuring it out sooner rather than later.  Heading into play Thursday, he has a .310 average (9 for 29) and eight RBI over his past seven games.

If anyone can turn it around, it’s Pujols.

So now might be the time to roll the dice try and buy him at a discounted price. If it works out, you can call yourself a shrewd fantasy manager. If not, you can always blame Pujols for your miserable place in the standings.